Compassion in Action’s CEO has been featured in a unique voluntary project celebrating female entrepreneurship.

Pam Gilligan was selected from thousands of applicants to take part in #SheCan365, which told the stories of 365 female entrepreneurs over 365 consecutive days in exactly 365 words.

The original website won ‘Best Blog of 2020’ at the Single Mums Business Network Awards 2020, as well as being turned into a book following a successful Kickstarter campaign.

“Out of all the female entrepreneurs in the UK, I am honoured to have been chosen to be included in the #SheCan365 project, which is a world first,” said Pam, who is CEO and Founder of Compassion in Action – based at Patrick House on Leigh Road.

“In these times of austerity, it is more important than ever for charities to adopt an entrepreneurial mindset to remain financially viable. The community services that Compassion in Action has developed and continue to deliver are well-evidenced and meet the needs of the people. Accountability, evidence and sustainability – together with a Board and staff team with the same vision and passion for the work of the charity – are key factors for our success.

‘Since Compassion in Action was founded in 2006, we have had belief and support from many amazing partners – including Wigan Council, Wigan Borough CCG, North West Boroughs Healthcare NHS Foundation Trust and many companies, schools and communities throughout the borough. Our partnerships are a shining example of how businesses can work positively with charities to meet the needs of people.”

Within 48 hours, Helen financed and built the #SheCan365 website in her capacity as host and the project officially launched on International Women’s Day 2019.

“From the thousands of female business owners who came forward, we chose an inclusive, diverse range of women at every stage of the business journey – from charitable CEOs and start-ups to seven-figure ventures,” explained Michelle, who is co-director of Write on Time Ltd.

“Every contributor gave their time freely – discussing how they pursued their passion and purpose whilst managing everything from health and fertility issues to family life, identity crises and financial battles. The universal theme that emerged was one of resilience.”

In response to popular demand, the #SheCan365 team raised more than £9,500 through crowdfunding to publish the whole collection of stories in a coffee table-style book. They are also proudly supporting CoppaFeel! – a national breast cancer awareness charity.

“The #SheCan365 book is about the nature of women who commit to showing up every single day, 365 days a year – and what CAN be achieved when success is a decision,” said Helen.

“When I told my story to be Day 1, I had decided I was going to sell £1m+ of my ‘LinkedIn Mastermind’ course – and I did. In 365 days, my business and I have evolved, grown and changed, and now new and exciting goals are being set.

‘I am so proud of all our contributors, as well as Michelle and Christian. This is the boldest and most ambitious project I’ve ever challenged someone to do, and I’m super-excited for the next phase of evolution for #SheCan365.”

The #SheCan365 book is available here. 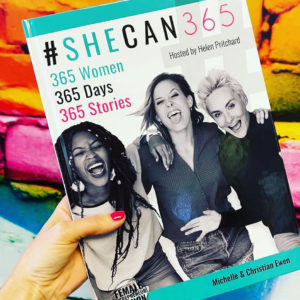 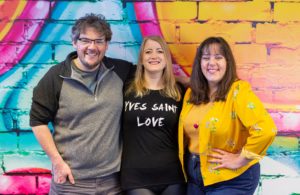